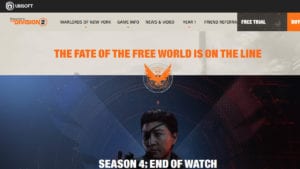 Tom Clancy’s The Division 2 is a shooter that came out on March 15, 2019. The company massive entertainment developed the game and Ubisoft published it.  In it you are able to play in one of three game modes campaign, Co-op, PVP. You will also explore dark zones, which are unique areas of Washington D.C. You will have to take on the environment as well as other players to survive them. As for straight up pvp, you can play in a skirmish mode that is equivalent to a Team Deathmatch. The game is extremely fun to play, but lad can ruin your experience. Some of this is due to the server, but the rest comes from your own connection to the game. In this post we will show you how to fix lag spikes and lower ping times with a VPN. We will provide suggestions for PC, PS4, and Xbox One devices.

Here is the quickest way to improve Tom Clancy’s The Division 2 lag on PC with a VPN.

Why Does The Division Lag?

The popularity of The Division 2 is both a blessing and a curse. As we mentioned, you will compete against other players with differing Internet connection speeds. If you have performance issues when using the Internet in general then you can expect lag spikes when playing The Division 2. The two main considerations for lag are your Internet speed and hardware. PC gamers will want to focus on CPU, memory, and graphics card. Everyone needs a fast Internet connection.

More Tips to Fix Lag Spikes in The Division 2

A LAN cable will give you the fastest speeds, so try to connect your device to it if possible. You may want to set a separate WiFi network for gaming or prioritize your traffic, if you cannot. Want to see the Tom Clancy’s The Division 2 servers are down or others are having issues? You can check up with The Divison 2  Twitter. You can also look at Downdetector to see if other users are having issues connecting to The Division 2 servers.

Ubisoft has not released the server locations for Tom Clancy’s The Division 2. However, Reddit users have found they have data centers in the Americas, Europe, and Australia. This is great as ExpressVPN has servers located globally.

This section is mainly for PC gamers. You will want to make sure you have the proper system specs for The Division 2. The minimum requirements are often not enough to enjoy the game.

How to Play The Division 2 with ExpressVPN